I made these two drawing on A1 Somerset Velvet paper interpreting a poem based on the theme ‘Crow’ by Sheffield poet Kate Garrett. I know her through Artipeeps, the Cambridge Arts group, and our work for Book VII of Ovid’s Metamorphoses for Transformations was printed together on a card. I love her poetry and hoped she would say yes when I suggested we did our own collaboration. She did agree and has written a very powerful poem which I have been responding to over the past couple of weeks. The first drawing was made with Indian-ink with crow feathers dipped in there. I used them like pens but also turned them round so I could paint with the soft end. I respect the feathers and don’t ask too much of them. It’s all about listening to the drawing tools and media that you’re using. I went to the graveyard to watch crows but they wouldn’t let me get too close. They were attracted to the bird-feeder there, but as soon as I approach they disappear. I’m accepting their illusive quality and am listening to their cries. I can distinguish between jackdaws and crows calls now. Don’t forget to click on the image to enlarge and see the marks more clearly. 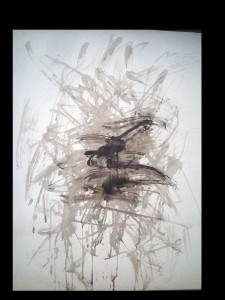