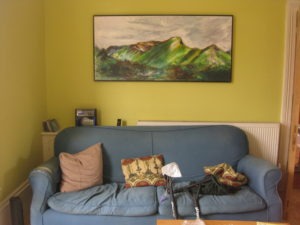 I guess the story of this painting is interesting in itself. It was a commission for some good friends that came out of showing them some other paintings of mine. They liked the ‘Cader Idris’ piece I had done a while before and even indicated they would like to buy it. I was very pleased, but I had my reservations as I had been trying to collect pictures with a view to creating an exhibition at some point in the future. I didn’t really want to sell off individual pieces as I went along.

I offered to do a painting of their special place instead, saying we could all go together to wherever that might be and they could indicate exact locations that they would want their picture to evolve from, and give me any other pointers. This would be a kind of ‘recce’ to find a spot that really resonated with them. Then I would return to that exact place at some later date on my own, and draw from life, take photographs and colour notes to contextualise the work.

They went away to think about this, and a week or so later told me that the mountain near Keswick named Catbells was their favourite place. We had a great day subsequent to that, going up there with the whole family. We went behind the mountain, and then looked at views from the lake, had a picnic and finally decided on a spot that they thought would be special for them.

A little while later I chose my day to go up with my materials and camera. It was overcast before I set off and not looking hopeful at all. I’d been watching the weather forecast all week, and even asked my technician whether she thought it was a good idea to go or not. She said that often things turn out for the best and to go for it! Remembering this advice, I packed my stuff and set off. It rained nearly all the way up there. By the time I had set myself up by the lake it was windy, cold and raining even more. I persevered, settled under my large umbrella determined to succeed in my task. As I started drawing my interest in making marks took over and I gradually started getting into the work.

Time went by, and I became aware that the clouds were parting and the sun was coming out. I began to hear the sound of peoples’ voices as boats came onto the lake. The whole day was transformed, and the mountain looked like a giant protective sleeping dragon. The water lapped the edge of the shore and my drawing developed. I began to think that this might work after all!

Once I got home I set up my canvas outside in our back yard and started painting. The whole piece took on a life of its own, and over the course of the next week came together. I really enjoyed the whole process, especially being able to make something that meant so much to my friends. Fortunately they liked it, and it’s now in its designated place above their sofa.