Anything can be a subject. The intimate quality of belongings left by accident in an arrangement where the juxtaposition of colours and textures become possible motifs. Also, the nature of the objects themselves and their history have always been of interest. They often happen as ‘inbetween’ pieces, out of a kind of rest between making larger pieces from going out into the world and into nature. These more intimate studies have their own quality that is more ordinary yet surprising at the same time. 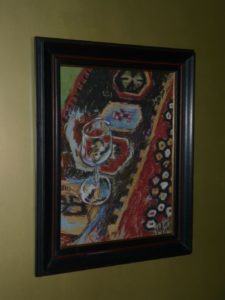 The ‘Glass on the Rug’ of 1992 was really about the colours of a Turkish rug that were distorted and changed by a glass on the floor. I noticed this as I looked down one evening. It wasn’t artificially ‘set up’. The marks and energy that came out of this were a surprise. I was happy with my decision as to when to stop drawing. The piece did not become overworked. There is another painting of glassware with fabric done a few years before that has a similar feel: ‘Scottish Glass’ of 1986 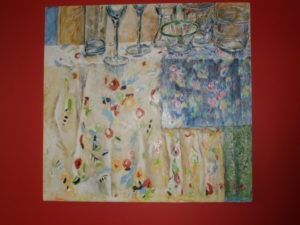 This belongs to some friends and you can see a photograph of it ‘in situ’ in their house. You can also see ‘Glass on a Rug’ now on the wall of my sister-in-law’s dining room.

The painting called ‘Slippers with cushion and glass‘ was made in 2010 and is a much more recent work, but it came from similar starting points. I had just been reading, lying on the cushion and drinking from the glass. The Indian cushion and slippers formed an arrangement that I knew would become a painting. 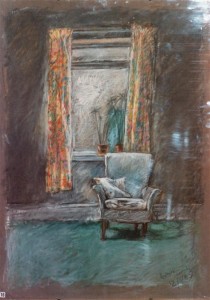 The ‘Chair with Cushion’ was made in 1984 shortly after my son’s birth, and falls into the same category as well. I noticed the crushed cushion on the chair in front of the window which was crying out to be drawn. It was made in soft pastel in the afternoon whilst my son slept. I was pleased that I was able to draw and be a mother as well! However, the afternoon sleeps soon went, and with them my peaceful drawing time! The original is now in my nephew’s house in its place in his dining room.

I have painted my scarves in a pile as a kind of limbering up exercise, but often these works are much freer, less inhibited and have an urgency that makes them pieces in their own right. The ‘in-between pieces’ teach me a lot about how I see the world. Human presence is there, but I don’t have an interest in actually drawing the people. People are a bit much in so many ways! Their presence is referenced in these works, though there is a kind of silent absence of people, as if they have just left or are about to return. The empty chair, the glass left casually where someone has just been talking or reading. This is what interests me. In reality they form satisfying little rests for our eyes and spirit, whatever situation we might be in. My eyes are always looking for these refuges or rests, and always finding them and enjoying them for what they are, no more no less. I hope you can share them with me through my work.