I took this shot of Jonas Van Genechten of team Iam waiting at the start of the stage that began in Clitheroe on Monday. It occurred to me after that it very much fits with my ‘Solitary Figure’ investigations. He was sat leaning on the handlebars of his bike with one hand under his chin deep in thought for quite a while and I took a few shots. It seems you can be lost and your own world even when surrounded by others and under pressure to perform. He is a sprinter and I know he had a tough stage in Wales the day before in the mountains. I hadn’t heard of him before but will certainly look out for him now. He has to perform for his team as well as for himself which must be a huge deal. He was waiting and composing himself I guess. The only thing that distracted him was ITV4 filmcrew who started reporting near to him. He didn’t feel the need to speak to anyone but was next to his team mates. I even managed to pull back and get an extra shot showing more of the background. This was the best one and is better composed I think. I love the way his free hand curls over the handlebars. He seemed relaxed but ready to tackle the job he needed to do. They are such athletes at the top of their form. It certainly made me think. I’ve been stretching a canvas ready to tackle more negative aspects of being alone lost in thought. Watch this space! I’m more reluctant to approach this for obvious reasons, however most interesting things happen when you go towards the dark side! 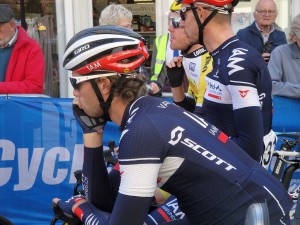